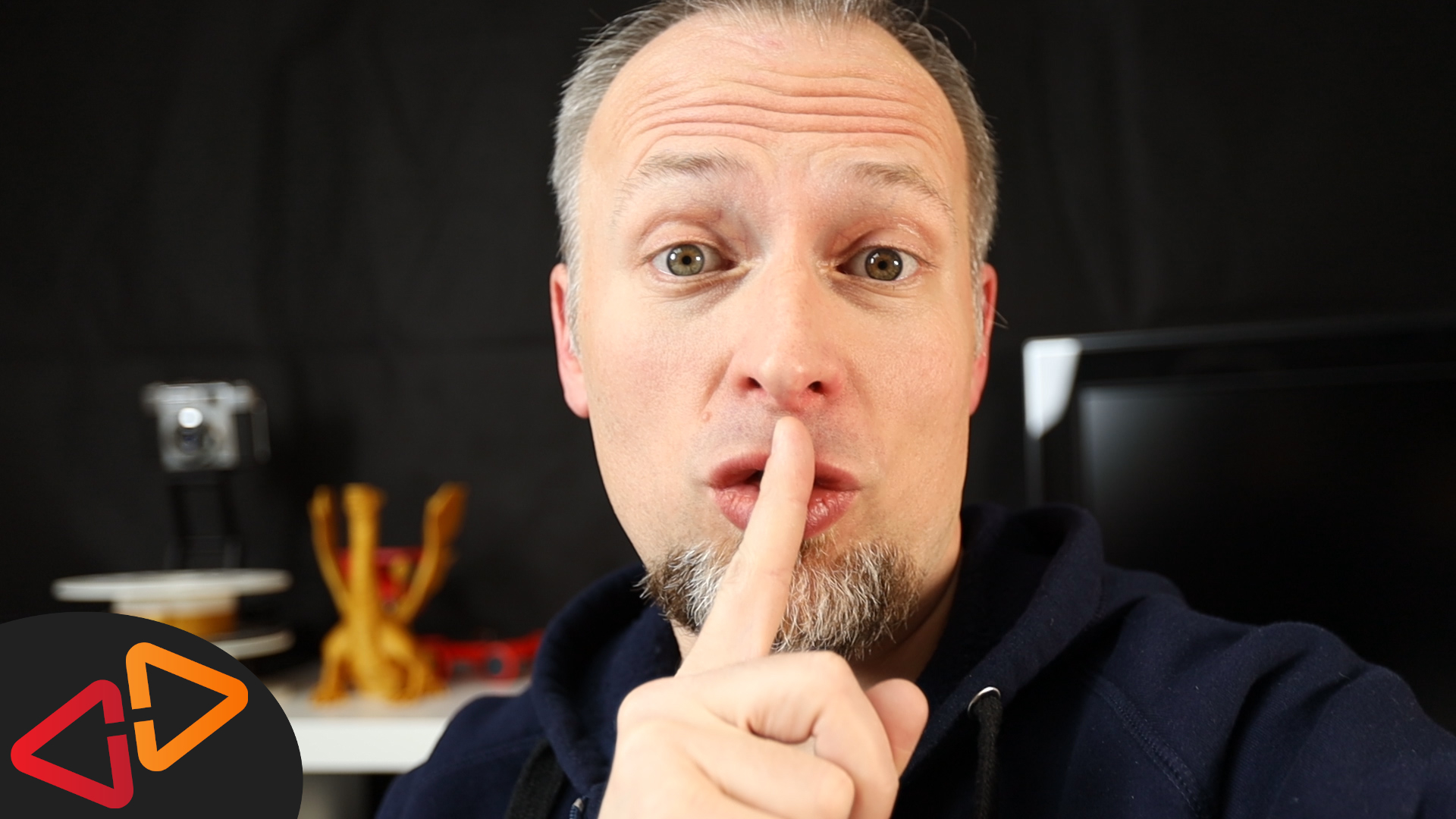 In this video, I am testing a few more Fan Shroud Upgrades for the Ender 3 and how better Fans can reduce the noise level of this printer even further.

Read the blog-post below for a text version.

So you like to make your Ender 3 print really silent? Guess what, this video is about exactly that. Now, if you have missed my other video about the new Creality Silent Mainboard 1.1.5 for the Ender 3, it's linked in the card here.

With the new mainboard, this printer now prints silently - theoretically. The only issue left is the fan noise, which keeps the overall level of noise up pretty high. But today, we want to take it a few steps further and get the base noise level down as much as possible.

Let's have a brief look at the results from the last attempt to reduce noise levels on the Ender 3. We landed at an average level of 52 dba.

Because of the new mainboard, the mainboard fan has to run full speed all the time. The new stepper motors need a lot more cooling, so this screwed up the result a bit, but this is going to change for sure with the upgrades I have planned.

I am starting with the electronics case fan. I was investigating a bit onTthingiverse and I actually found a very promising upgrade that let's us keep the existing fan but we will get rid of the electronics case cover and replace it with a 3D printed sound dampened version. The assembly is pretty straightforward.

First, we remove the old fan shroud together with the metal case lid

We detach the fan from the metal cover and mount it to the the new silent cover.

The new cover needs to be screwed down into the original position of the metal cover. Don't worry, if you have to push it a bit into position.

As in the last video, I am using a calibrated sound level metering tool with recording software to monitor the print of a benchy and the warmup phase. We will compare the results with the sound levels we measured last time with the small electronics case fan shroud and the fan shroud on the power supply.

With the new silent mainboard cover, the average noise level has come down to 50dba on average, so it's not nothing but a little improvement. But I think, we can do better.

Another mod I found on thingiverse is this fan cover for the power supply that adds additional turns to the airflow so it should reduce the fain noise a little bit more than this first one I used until today. Let's put it on the Power supply fan and do another measurement.

Mounting this mod is fairly easy, but you have to follow one really important guidance. Unscrew only one power supply fan screw at a time. If you unscrew both at the same time, the fan will fall into the power supply case and you will have to open the case and put it back into position.

Second tip - Really make sure when you tighten the first screw with the fan shroud that you actually have hit the fan's screw hole and the fan is pulled against the PSU housing.

If there is a gap between the PSU housing and the cover, put some tape over it on both the upper and lower side of the cover.

Now we are ready for another measurement. Let's check the results in our spreadsheet

And there is virtually no difference. Still at 50dba average. The loudest fan seems to be still the mainboard fan at the moment.

So, printed upgrades can take us so far, but if we want even more noise reduction, we need to invest in better fans.

The first thing I like to show you is another modification to the mainboard cover, which uses a 60mm silent fan.

The 60mm fan is a 12V fan this time, so I am going to use a buck converter to regulate the power down to 12vb or below. Since this is a much more powerful fan than the little one before, it might be enough to run this at a lower speed to generate enough airflow. This is something we can test later. I wanna know how loud it is at full speed.

The Extruder cooling fan is also connected to same output, so make sure you connect both fans. I am twisting the same colored wires with each other to make sure both are inserted to the same terminals.

So, this fan is placed into the opening in the bottom of the cover.

The fan should blow towards the mainboard. Fix the fan with at least two screws, so it cannot fall out.

And then the cover gets fixed with the original three screws of the mainboard cover.

Let's see how much more silent our printer is with this modification.

Looking at the new noise level curve with the 60mm mainboard fan and the better PSU cover, we are down to 47.5dba on average, which is a great step forward.

Now, the loudest fans left seem to be the power supply fan and the extruder and parts cooling fans, so let's take care of them.

On Thingiverse, I've found another modification that claims to be a silent mod for the extruder and parts fan and it looks really cool, so let's install this.

This upgrade requires you to remove both the original extruder fan holder as well as the parts cooling fan.

Now, this might actually look a bit scary, because I had to cut some cables and soldier some wires but it's all doable, trust me.

I inserted new wires for the new fans into the cable wrap using a piece of hardwire, which I first pushed through the  tube and then pulled the new cables through. That was really simple.

Now, I soldered the new fans to the cables and connected everything back to the mainboard.

The blower fans are 12V fans, so I connected two in serial to make them work with 24V.

I also installed a buck converters to the extruder fan, so I could lower the speed as needed.

Look at this installation, it looks really cool and will hopefully be more quiet.

Another sound level measurement of this new setup shows that during the warmup phase and the first layer, we are coming down to about 42dba, which is great but when the next layers start and the blower fans kick in, the whole setup is back to 52dba and a bit more, so not really what I was expecting.

Anyways, Finally, I went for the PSU Fan and replaced it with another case mod from Thingiverse. I have found three versions, which I have put in the description down below.

You need to check what power supply you have and where your bolts are currently positioned to choose the right cover. I went for the 80mm fan version but there is also 92mm versions.

Now, a bit of a warning here, we are changing electronic parts inside of a power supply - this is not for everyone. So if you don't know what you're doing, don't do it - this is optional. Anyways, if you do it, your warranty will be voided.

I am installing the new PSU fan to the inside of the cover. The buck converter gets hot gued to the cover, and I have drilled a hole, so I can regulate it from the outside.

Now we connect the new fan back to the PSU board and close everything to test it.

Looks fine, we can turn down the fan speed a little bit, this makes it even more silent.

And now, I am so pumped for the final result, let's have a look

We see that during the warmup phase, this printer is at 32.5dba, let that sink in. That's barely more than the noise level, me being in the same room just breathing.

The first layer prints at 35dba and the following layers are again at 52dba.

So what upgrades are worth the effort, what is the best combination, let's wrap it up.

On average, you can get down by a few dbas with the printable upgrades only. The silent mainboard cover and the PSU fan cover do quite a good job. The new mainboard is really making prints super silent on top. Another real improvent were the 60mm mainboard case fan with the buck converter and the 80mm power supply fan upgrade also with a buck converter. So with all these upgrades, you can come down to 47 maybe 45dba on average, which is 10dba less compared to the original printer setup without any modifications. So this is quite a lot.

The extruder fan upgrade is something that actually made things worse because the blower fans produce more noise then before, so I would say unless you want to improve a lot the cooling, which this upgrade does definitely, you don't need that one.

Links to all upgrade parts are in the description and also the hardware parts I used. As usual, they are affiliate links that help the channel.

I hope you had fun watching this, don't forget to subscribe! See you next time!

Get the Creality Ender 3 here:
https://geni.us/ender3

? "I Print PLA" fan shirts are available NOW at: http://bit.ly/crosslinkshop