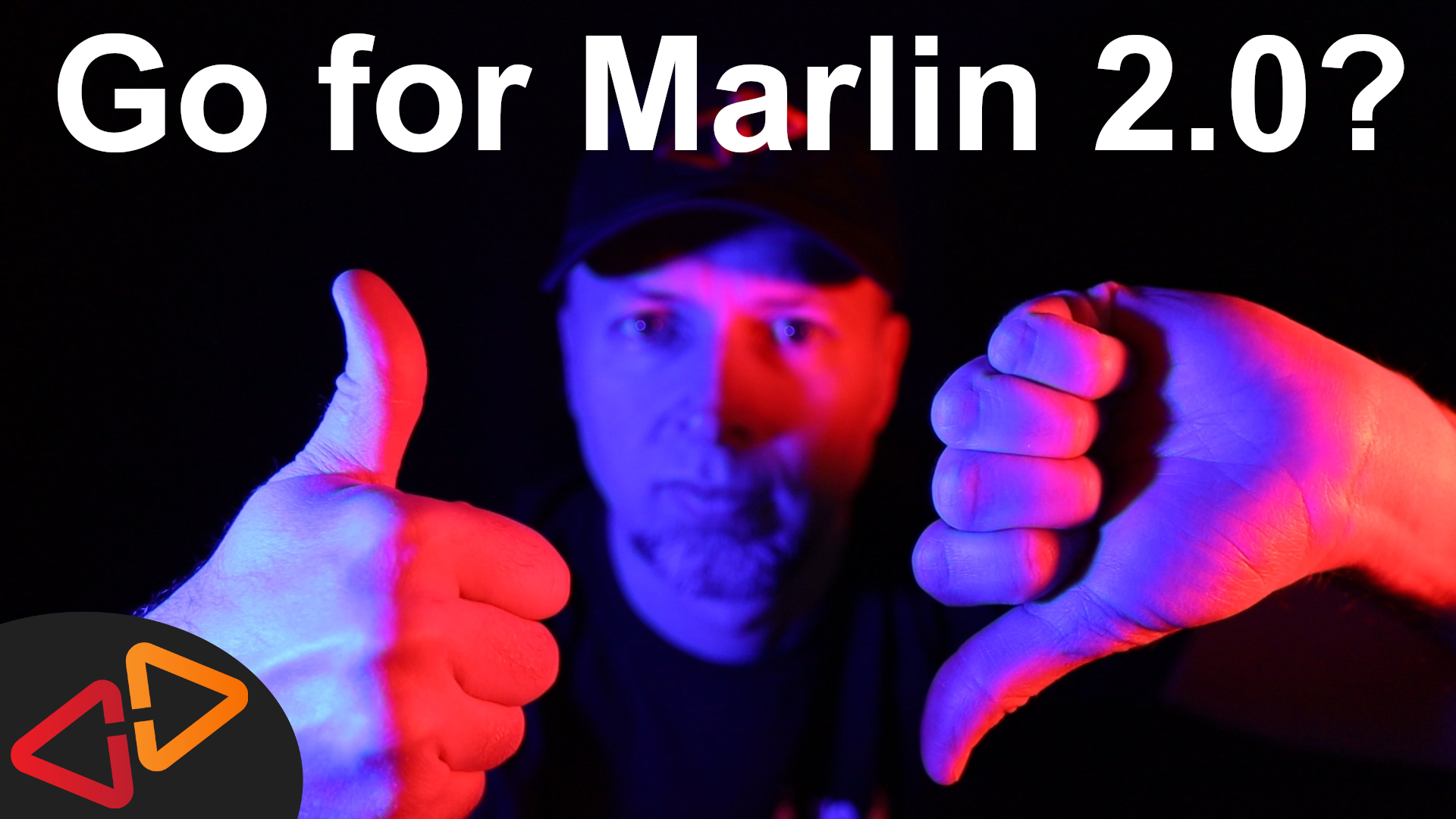 In this video, I will tell you why you should upgrade your 3D printer to Marlin Firmware 2.0 and why maybe not, and we're starting right now!

Read the full transcript below if you prefer a written version.

Hello, my name is Daniel, welcome to the CrossLink channel. I would like to help you being more successful with 3d printing and if you're here for the first time, subscribe and hit the bell notification so you don't miss anything.

So you're thinking about whether to upgrade to Marlin 2.0 or not, this video will give you a lot of pros and cons and make your decision a bit easier.

The last video I made about upgrading the Ender 3 to Marlin 2.0 raised a lot of questions around problems with the upload process, general issues with Marlin builds and also issues where people asked me why enabling multiple features like auto bed leveling, sd card support and linear advance at the same time causes out of memory issues when trying to compile Marlin 2.0 and we wanna shed a little bit more light on this whole complex.

But before I go into the details, I have one question to you: Why do you want to upgrade to Marlin 2.0 and NOT stay with the previous release 1.1.9? Please put your reasons it in the comment section.

So for all of you who are new in this topic, I have made a list of things that are reasons why you should upgrade from your stock firmware that the printer manufacturer has flashed on your printer to Marlin firmware and I don't mean specifically 2.0 but generally Marlin firmware.

So, there's a few really good reasons why you wanna do this

First, there is thermal runaway protection and I say this in all of my videos about firmware. This is one of the safety features, printer manufacturers for some reasons don't enable or don't properly test with their printer releases. So this is a must have feature.

Second might be mesh bed leveling. If your printer doesn't have a bed leveling probe, this is a very good alternative that helps you to get the first layer right, without any hardware modifications. I really like that feature a lot.

Number 4) Power loss recovery might be something that you want if you think that either you might have a power loss during long prints or someone will accidently turn off your printer during printing.

As number 5 we have Linear advance, which will help you get better print results with sharp corners so these corners will not have any distortions from overextrusion anymore if you calibrate this precisely.

And overall I would say, Marlin firmware will give you more stability and the latest features for free. Remember, printer manufacturers of cheap printers mostly treat their products like fire and forget. Once they are produced, they will mostly never see a firmware upgrade, so you have to take care yourself if you want things to be fixed.

Now, let's come to the different versions of Marlin firmware and what makes each version special and probably better for you.

So, let's say you have already a printer running Marlin 1.1.9, the last version before 2.0, what would be good reasons to upgrade.

First, there is 32Bit support, which is the most important change that was introduced with this new version.

If you intent to upgrade your mainboard and switch it out with a 32Bit mainboard, you will also have to upgrade to Marlin 2.0.

Then, there is new support for new touchscreens like the tft35 for the ender 3, which is only present in Marlin 2.0 and I'm gonna test this on the Ender 3 very soon.

Also if you like to install a BLTouch version 3, it's only supported in Marlin 2.0

In general, you have to know, any new feature or hardware support will only be added to Marlin 2.0, Marlin 1.1.9 is end of life, it will not get any new features and probably any bugfixes.

So, the whole community of developers and supporters is heading for Marlin 2.0, this might in the long term be a reason for you to also make the shift, probably using new hardware like a RAMPs board, which has more memory available or going right for a 32bit board, which has even more power and some of those support Wifi and more cool features, which are really tempting.

But what are reasons that will keep you from upgrading to Marlin 2.0?

First, there is the fact that most of the features that existed already in Marlin 1.1.9 will take up more of the available program memory in the 2.0 version. I can only imagine that this is the case because there has been a lot of changes and improvements in these existing features that cause the overall memory consumption to grow.

For example in Marlin 1.1.9 you can have SDCARD support together with Auto Bed Leveling and Bltouch support and this would still fit on the 8Bit board with only 128KB of program memory. Just barely with 1% memory left, but it will fit.

This combination will make you disable SDCARD support in Marlin 2.0 to be able to fit Auto Bed leveling and BLtouch support to the old 8Bit mainboards. I definitely can say that a lot of you will have to disable SD Card support if you want to use Marlin 2.0 and find another way how to control your printer, be it either directly from your computer using Cura, Pronterface or using a raspberry pi with octoprint or another solution.

I've also done some more research on the topic of memory consumption in Marlin 2.0 on 8Bit boards and wrote a blog post with more details and a list of features and their memory consumption. You can look it up in the description of this video to learn more and how to mitigate.

And there is also power loss recovery specifically, which needs the sd card support, so you cannot enable it and auto bed leveling, bltouch and more features, so you see where this is going.

To be honest, today - and this might of course change the longer this video exists - there is not so many things that are better in Marlin 2.0 compared to 1.1.9 for somebody who has an 8Bit board like in the Anet A8 or Ender 3 or basically almost any cheap printer released in the last years.

However, there is some exceptions in the 8Bit world that might not run into these kind of memory problems, naming the RAMPs boards with the Arduino Mega 2560 processor. That has 256 kilobytes of memory, which is twice the amount of memory the usual 8Bit boards have.

Another board that comes to my mind is the Trigorilla, which also has the same processor. So these might be safe to use with Marlin 2.0 and all the features, because they have more memory.

But honestly, if you would have to buy a new mainboard today, go for 32bit for sure. These boards are at least the same price of a RAMPs board if not sometimes even cheaper.

Anyways the most expensive thing with a new board will probably be the stepper drivers not the board itself. If you like the latest and greatest silent drivers from TMC for example.

I also have a few words to say about Marlin 2.0 in general. I have seen a lot of changes to Marlin 2.0 just in the last two weeks. For example when I released the Ender 3 Upgrade to Marlin 2.0 video, Marlin 2.0.1 was the latest version. And now, two weeks later, we are at 2.0.3 and one major change happened already.

The default configuration files for all the different printer models have been moved out of the Marlin repository in github to another repository and people already start complaining that they don't find the config files anymore.

I can just very much relate to anyone who is not used to be a programmer and using github and just because files have disappeared from a directory that the next thing to do is to read the readme file in that directory to find out where the files have gone. I think you know what I mean.

There seems a lot of momentum in the Marlin 2.0 development, this is good but it also means that any kind of howto video or documentation might be outdated fast. For you as a beginner, unless you have to go for 2.0, it might be better to use the 1.1.9 release because it is stable and there is still lots of valid information out there on how to use it.

So in general, you see, there is pros and cons and quite some things to consider but in general Marlin 2.0 is where the community is heading so we should all be aware of the implications be it we will have to upgrade our mainboards at some point in the future or we stay with what we have.

But that can also be totally fine. If you have a printer that is working fine and it's producing great results, probably better don't change that.

So, I hope you're getting value out of this video. If so, like it, share it with your friends. Don't forget to subscribe. I will see you in the next one, bye bye.