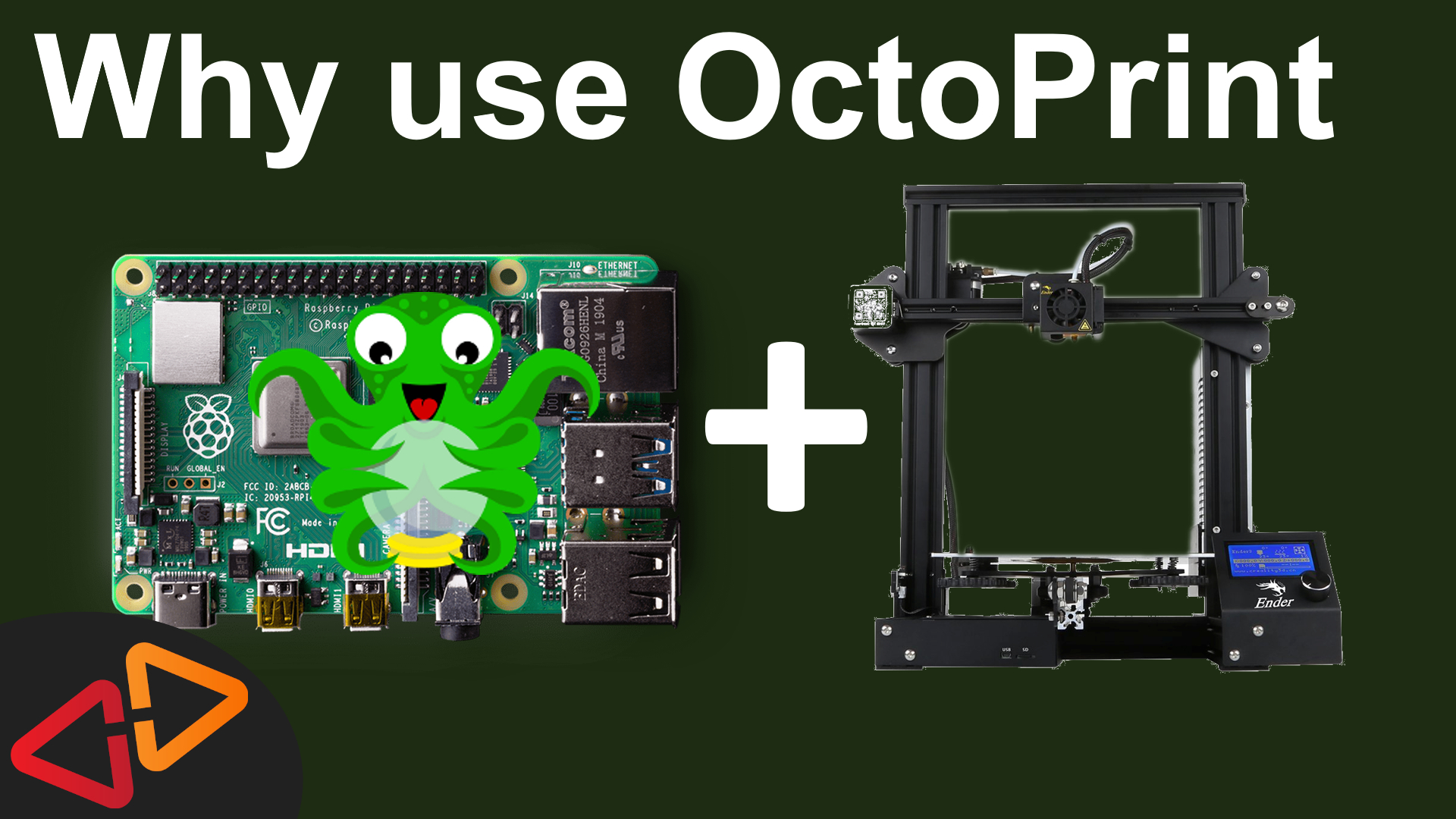 Why you should use OctoPrint

In this video, I'll talk about why OctoPrint is the perfect solution to control your 3D printer from anywhere.

Read the full transcript below if you prefer a written version.

Don't forget to enter the Giveaway for a Raspberry Pi 4 4GB Starter Kit at https://crosslink.io/free

Running a 3D printer unsupervised can be a little scary, especially if you let it run overnight or when you're not in the house.

In general, the best is of course not to leave the printer alone but even if you're in the house, it's just inconvenient if you have the printer in a distant room and you're working in another part of the house and just want to start a print or wanna know how long it's still going to take to be finished.

There comes OctoPrint, to supervise and remotely control your printer from basically anywhere.

Octoprint is a software application that runs on a computer, it could be a normal PC or just a Raspberry Pi - that's what I prefer - and that computer gets connected to your 3D printer using a USB cable. Octoprint then can send commands over that cable to your printer.

Usually these commands are generated by your slicer software and get saved to a so called gcode file. Basically, that's a huge textfile with a lot of lines in it. And each line is a command that the printer uses to move its motors, extrude filament, heat up the nozzle - printing what it should be printing.

Instead of putting this file on a sdcard as you usually would do and then insert it into the printer to execute the commands in these files, you can upload them to the OctoPrint Software via the web-interface and then it will transfer all these commands over to the printer using that USB cable.

And while that is happening, you can be in a toally different location as long as you have a network connection to the computer that is running OctoPrint. I can be in my office, designing a 3D model, then slicing it with CURA and from there I can directly send it to my printer via OctoPrint, so I don't have to go down to the basement to start the print.

I personally use OctoPrint since many years and I am super happy with it. For me it makes any printer that I have so much more powerful that even a super cheap Anet A8 with the default mainboard will get features that even a 5000 dollar printer sometimes doesn't offer.

But there is even more features available to extend OctoPrint in so many ways through so called Plugins.

These Plugins can for example enable OctoPrint to turn the power for your 3D printer on and off using these super cheap Sonoff Power Plugs.

Or you can enable a Plugin like the Spaghetty Detective that analyzes the images from a webcam looking at your 3D printers print surface if there might be an issue with the print going on like stringing or the print detaching from the print surface and it will notify you and can even stop your printer to prevent damage and waste of material.

So you see, the possibilities are endless but I don't wanna overwhelm you already at this point, let's first explain the basics and come back to advanced features in another part of the series.

Now, let's go a little bit deeper to understand what OctoPrint actually is under the hood - bare with me, we are still scratching the surface here but a few technical details you should know so you can really understand how to use it best.

The user interface of OctoPrint is a web application that's also hosted on the same computer where the OctoPrint core application is running.

That internal app to app communication is done over a so called API an application programming interface. We will deal with that term from time to time so you have already heard it.

And the web app is not the only way how you can connect and monitor what's going on with your 3D printer. There is a large number of mobile apps for iOS and Android which can connect to your OctoPrint server also using that API.

Each of them looks a bit different, some of them are free, some of them cost money and I will do another seperate video about mobile apps for OctoPrint very soon, so make sure you are subscribed and have your bell notifications enabled so you don't miss that.

Now from a technical point of view, the connection to OctoPrint from a mobile device or another computer could also be done over the internet but you should never allow a connection to your printer from the internet directly by using a so called port forwarding in your internet router, even if it sounds tempting and simple.

This is really the worst and most insecure way how to do this and I will show you different solutions how to safely connect to OctoPrint over the Internet in a follow up video of this series.

You see, there is so many great things about OctoPrint to discover and this was just the beginning to mainly get you ramped up about the why and a bit about the how.

I also like to take the opportunity to tell you a bit about the developer behind OctoPrint, Gina Häußge.

Gina has started the OctoPrint project by her own and is still the lead developer behind it. In the meanwhile there is a great community around OctoPrint that helps to test and bugfix OctoPrint as well as a large number of developers that create plugins to extend the functionality of OctoPrint.

If you are getting into using OctoPrint with your printer, please consider supporting Gina on her Patreon page or the other methods she offers on her homepage. I have put those links in the description. I know - it's free software - but the person behind it is doing this full time and we are often taking this effort for granted but it's not. Gina also does frequent live-streams to hang out with her supporters, which I also really like, so there is also something in for you beyond using the software if you become a supporter.

The next videos in this series will show you how to install OctoPrint on a Raspberry Pi to get you started quickly and from there we will discover how to get all the initial settings done, how to use it, securely access it from anywhere in the world and then discover advanced features and plugins step by step.

I am really super excited to create this series of OctoPrint focused videos for you. If you have suggestions what I should talk about in future videos, please use the comment section down below.

If you like this video, please do me a favor. I appreciate if you hit the like button or subscribe to my channel - BUT - the real way, how you can support me is - Go watch some of my other videos that I have linked for you in these two cards here.

Thanks for watching, see you next time.