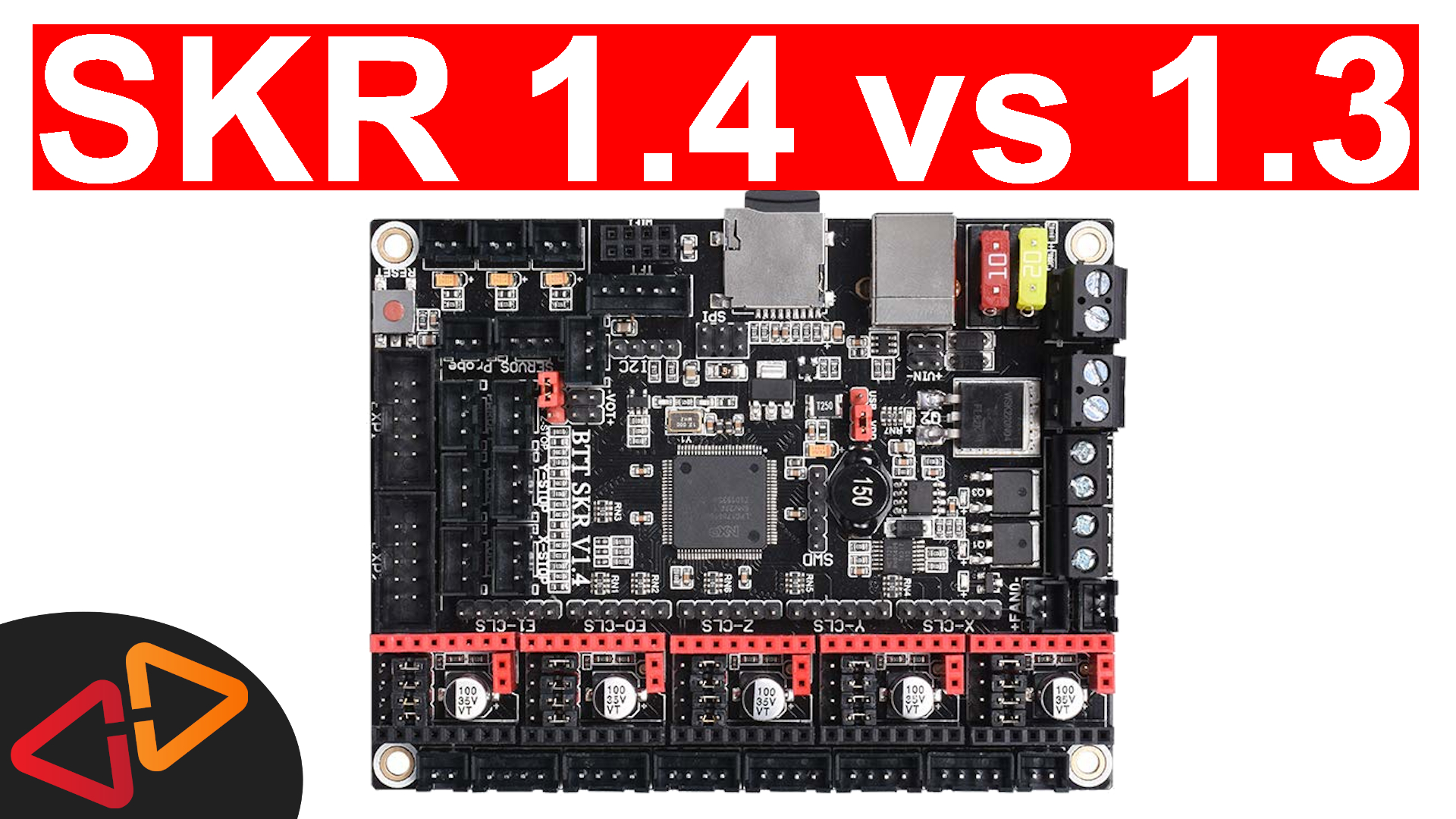 THIS is the Bigtreetech SKR 1.4 mainboard and I wanna know what's different between the 1.4 and the version 1.3 that's installed in this printer.

Over the last couple of weeks, I started to look a lot into 32 mainboards for my 3D printers and I already covered the SKR 1.3 installation and Marlin configuration, also for the BLTouch in depth in a series of videos that I've linked up here for you, just in case you missed it.

Today, let's look at the differences between the SKR 1.3 and SKR 14 as well as the SKR 1.4 turbo and if it's worth upgrading. So this chart is on the manufacturer's website, let's use this as a reference.

As usual all links to documentation, references and the hardware parts I am using are in the description of this video.

The valid question of course is how is this going to benefit your printer in terms of printing speed or printing quality.

I can imagine this could become important if you really want to print very fast with a lot of small print head movements so you don't run into stuttering issues and if you want to extend your printer with a lot of additional features.

Next point here on the list is the fan interfaces and there is a small mislead here because the SKR 1.3 has in fact two fan interfaces not one. The second one however is permanently on.

Now since the chart states that the SKR 1.4 and 1.4 Turbo have 3-way frequent fans, what does this exactly mean? It means that it has 3 outlets for permanently running fans, so they cannot be regulated via the firmware.

So you have a bit more choice where you like to connect your permanently running fans to the mainboard, this might be an improvement for some printers in terms of getting a bit of a cleaner wiring.

However this looks like a bit like a missed opportunity to include more regulated fan outputs for multiple hotends for example. But maybe this is something for a 1.5 version? Let's see.

Next, there is more DIY interfaces like I2C and SPI here, which is really helpful to tinker around more with external sensors and actors and it also has a WIFI interface, more exactly it has a connector where you can plug in an ESP8266 wifi module to run something like ESP3D on.

We're going to see how this WIFI extension works exactly soon in another video.

Next, the chart mentions closed loop driver connectors, which are new with the 1.4 and 1.4 turbo.

These are here underneath the stepper driver slots.

Just to get you the idea, a closed loop stepper driver simply said is a more intelligent stepper driver that most of the time sits directly on or very close to the stepper motor.

I think I definitely will need to try out closed loop drivers really soon!

If you're interested going for this, having these separated connectors is nice to have but most of the closed loop drivers come with an adapter board that fits into these stepper driver slots, and that also means the SKR 1.3 is also able to work with closed loop drivers. The SKR 1.4 just makes it a bit of a cleaner way to connect them without the clunky adapter.

Next, the SKR 1.4 and 1.4 turbo have a double Z-Axis interface. That means, there is two connectors for Z-Motors that are running in parallel connected to the Z-motor stepper driver. This essentially removes the necessity to use these split adapters to connect two motors to one stepper driver. Cool!

Next up, the RGB light strip connector. This board is able to drive RGB lights like the Neopixel directly from this plug, I'm definitely interested how to use this.

But it's also true that running larger LED strips also requires an additional Power module, which is essentially just another voltage converter so the board gets enough power to drive these larger LED strips.

And then one last thing that's also new with the SKR 1.4 and turbo is there is a separate probe connector and the servo connector for the bltouch has been moved right next to it, so this will make connecting the bltouch more convenient but as you might have seen in my SKR 1.3 bltouch video, it's already pretty easy with the 1.3 version.

So that's it about the main differences between the SKR 1.3 and SKR 1.4 boards. Let me know in the comment section what you would like to know more about these boards, what videos I should make.

So is it worth upgrading to the SKR 1.4 if you already have and SKR 1.3? I'd say unless you really want the LED connector and the additional SPI and I2C interfaces, it's probably still good to stay with the SKR 1.3 for now.

On the other hand, if you're coming from an 8bit board and like upgrade to 32bit, I would go straight to the SKR 1.4 turbo because it's just about three dollars more as the 1.4 but it's 20% faster. Links to all mainboards and the tech specs are in the description.

Next up in this series will be the Hardware installation of the SKR 1.4, so make sure you don't miss that video and as usual, I've linked two other interesting videos here in these two cards for you.

Hope to see you soon back on the channel - bye!